0
The product has been added to your cart
Take advantage of free delivery for 0,00 € more
Continue Proceed to checkout
> Ranges>Alun>Certified Organic Roll-on Alum Deodorant 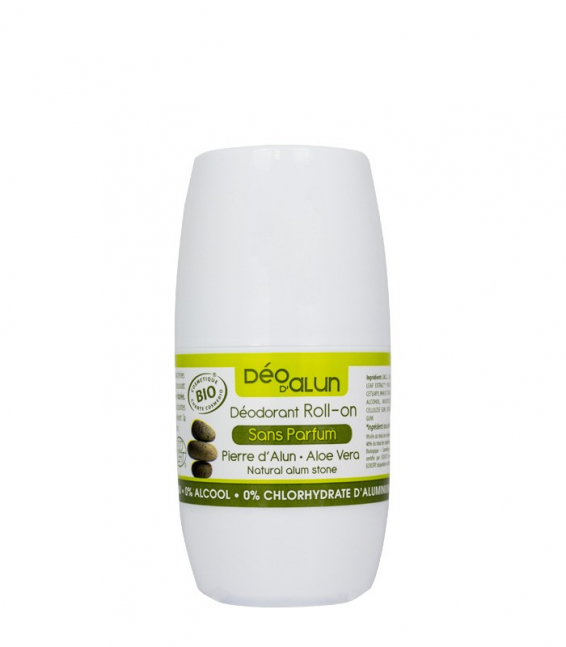 Thanks to alum stone’s astringent and antibacterial properties, the Certified Organic Roll-on Alum Deodorant regulates perspiration and reduces the development of bacteria responsible for unpleasant odours. Aloe vera softens and nourishes your underarms.

Thanks to the astringent and antibacterial properties alum stone Alum Deodorant Roll-on controls perspiration and reduce the formation of bacteria responsible for bad odors. Aloe Vera to soothe and nourish your armpits.

Potassium alum the properties are already known for several thousand years before Christ, he is even reported in an Egyptian papyrus. Used since ancient times by the Greeks and Romans as a cosmetic product and in the dyeing industry, where it was used to fix the colors. Other potassium alum stone came then uses them as complete water treatment by flocculation, detergents, mouthwash, modeling clay ... Many medical books are reporting using Alum stone Potassium surgery or in the treatment of various pathologies. "Sel Very formerly known since Hippocrates speaks; taken from the first of Levant, where they exist, as well as in other parts of the world, considerable mass, named Aluminières [...] It is a strong astringent; and, as such, it passes for styptic and antiseptic. It was touted in a host of diseases "(Source: Universal Dictionary of Materia Medica and General Therapeutics, 1837) The main alum stone producing countries are America, Australia, China, Japan, Russia which is extracted alunite. In Europe, alum was produced mainly by Italy; France and Hungary had for their poor performance of deposits.

DIRECTIONS: Shake before use. Apply Alum Roll-on Deodorant under your arms, for effective results all day long.

99.6% of the total ingredients are of natural origin

40% of the total ingredients from Organic Agriculture

French company
> About us

Free delivery
From €59 in metropolitan France